Cuba has used homeopathy as an alternative to mass vaccination for many years, partly because of the cost of chemical vaccines was too great for the Cuban government.

The choice of homeopathy was wise. Homeopathy’s fame was at its highest in the XIXth century as it was used as the first medicine of choice in Europe and in America during the great mass epidemics of that time. In the late 1800s, a statue was of the founder of Homeopathy was even built a few blocks from the White House to acknowledge the contribution of homeopathy in the health of the USA.

The Cuban experiment gives a great opportunity to review a modern-day experiment of using homeopathy, a medical approach widely derided in conventional medicine. This experiment has been hugely successful and fits all scientific protocol, you would expect. You can find the results in the US National Library of Medicine(1). 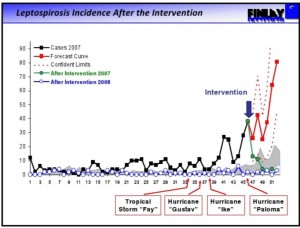 Leptospirosis is an infection of major importance in Cuba and its incidence is at its highest in rainy seasons. Homeopathic prophylaxis (or Homeoprophylaxis, the approach of using homeopathy to create immunisation) against Leptospirosis in dangerous epidemic situations was used in three provinces of Cuba in 2007. Forecast models were used to estimate possible trends of disease incidence and a homeopathic prophylactic remedy was administered orally to 2.3 million persons deemed to live in high risk regions. The data from surveillance were used to measure the impact of the intervention by comparing with historical trends and non-intervention regions. A significant decrease of the disease incidence was observed after the use of homeopathic immunisation, well below historic median and independent of rainfall. There was no such positive modifications in areas where homeopathy was not used. In the intervention region the incidence of Leptospirosis fell below the historic median.

Historical Evidence of the use of Homeopathy for mass immunisation

Homeopathy spread like fire in Europe primarily because it was extremely successful for acute diseases and especially epidemics. People then did not mind to know how it was working, but just wanted to feel safe and stay healthy. The historical use of Homeopathic Prophylaxis from Samuel Hahnemann, the founder of homeopathy to the present day, is widely evidenced throughout the homoeopathic literature, and used by many “masters” of homoeopathy(2).

In more recent times, scientific studies of the use of homeopathy in epidemic situations have been performed. Often quoted studies from Dr. Morinski and separately from Dr Golden show an effectiveness of around 90%(3).

Conclusion – Homeopathy as a form of effective and safe medicine

Medicine is an empirical science – factual evidence leads to rational explanations. We still do not know how aspirin and paracetamol works for example, but evidence shows some help. This is the same with homeopathy. While there are many theoretical model for it, there are not more than 5,000 pieces of evidence and research that are gold-standard. It is also relatively inexpensive and also very safe.

I hope that every parent would at least try and use it as a first aid for their kids.

Homeopathy, a safe, cost-effective and effective approach for mass immunisation